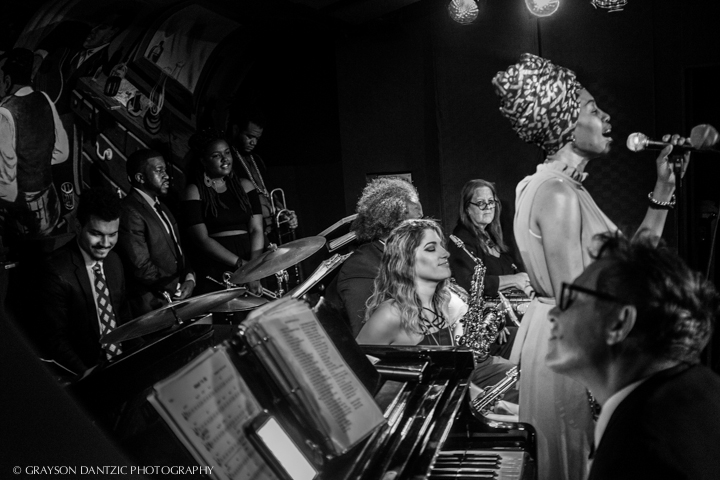 The JC Hopkins Biggish Band Presents “Meet Me at Minton’s”

Led by the bandleader, songwriter and producer for which it’s named, the JC Hopkins Biggish Band has always been a friend to vocalists –  Nate Chinen, The New York TImes

The combination of pianist-bandleader JC Hopkins and vocalist Queen Esther expertly recapture the vitality and energy of Harlem jazz and blues of 70 years ago without slavishly imitating anyone –  Will Friedwald, The Wall Street Journal

Described as a modern day Hoagy Carmichael, Grammy-nominated pianist, composer and impresario JC Hopkins has cultivated a multigenerational ensemble of jazz titans to produce “Meet Me At Minton’s; a compilation of classic big band hits amongst a string of scintillating originals. Featuring jazz’s poet laureate Jon Hendricks, alongside Grammy-award winning vocalist Andy Bey, Thelonious Monk Vocal Competition winner Jazzmeia Horn and co-founder of legendary funk group Sister Sledge, Kathy Sledge, the aptly titled “Meet Me At Minton’s” displays a powerhouse of esteemed vocalists, ranging from emerging prodigies to accomplished veterans of jazz. To mark the momentous release of this historically sentimental album, The JC Hopkins Biggish Band will be returning to the Slipper Room in New York City on Wednesday, August 2nd at 7pm. Home to jazz diva Norah Jones and pop queen, Lady Gaga, The Slipper Room can also be considered the home of the JC Hopkins Biggish Band, as it’s where they launched their original residency over a decade ago.

Their sophomore release “Meet Me At Minton’s” is launched by vocalist Brianna Thomas, alongside solos by Troy Roberts and Bruce Harris on Hopkins’ original “Remember When”. On “Suddenly (In Walked Bud)”, jazz legend Jon Hendricks trades 4’s with Charles Turner and Brianna Thomas, in a generational hopping scat. Andy Bey’s evocative vocal on the Hendricks/Monk tune, “Looking Back (Reflections)” which features harpist Brandee Younger, is spine tingling. Alicia Olatuja’s lends her vocals to Hopkins beautiful composition “Dreams Come True”, which was previously covered by Norah Jones and Willie Nelson. The special chemistry between Charles Turner and Queen Esther are featured as they perform the title track “Meet Me at Minton’s” and the Billie Holiday classic “Spreadin’ Rhythm Around.”  Young guitar phenom Solomon Hicks also turns in outstanding performances. The album is then drawn to a close by Jazzmeia Horn and Jon Hendricks as they perform a beautiful duet of the Hendricks/Monk ballad “How I Wish (Ask Me Now)”. Over the cour

Alongside their valuable contributions to this project, these musicians have developed themselves into universally lauded performers, in each of their own individual careers. Concord recording artist, Jazzmeia Horn was last year’s winner of the Thelonious Monk Prize. Her two features on the album – Hopkins’ original “What is Love” and her beautiful and touching duet with Mr. Hendricks – display her virtuosity and versatility. Her relationship with Jon is also very moving as their age difference spans decades – 70 to be exact. Alicia Olatuja, who joined Gregory Porter on his recent Grammy winning album, performs Hopkins’ Grammy nominated ballad, “Dreams Come True”. Rapidly rising star, Brianna Thomas, who is a regular at Dizzy’s Club Coca-Cola at Jazz at Lincoln Center, opens this album by providing her fierce and killer vocals to “Remember When”. 21 year old, Solomon Hicks was made lead guitarist for the Cotton Club Orchestra at the age of 13, and as can be heard on this album, has continued to hone his skill and accumulate upon his success as a musician. This album serves as a display of the diligently thought-through and perfectly arranged collaborations between the wide-ranging spectrum of jazz talents, both renowned and emerging, on today’s scene.

In addition to the star-studded performances heard on the album, “Meet Me at Mintons” serves as an acknowledgement to the talents of photographer Grayson Danzic, who has just put together a beautiful book “Billie Holiday at Sugar Hill” for Thames and Hudson Publications, which features never before scene photos of Billie Holiday.