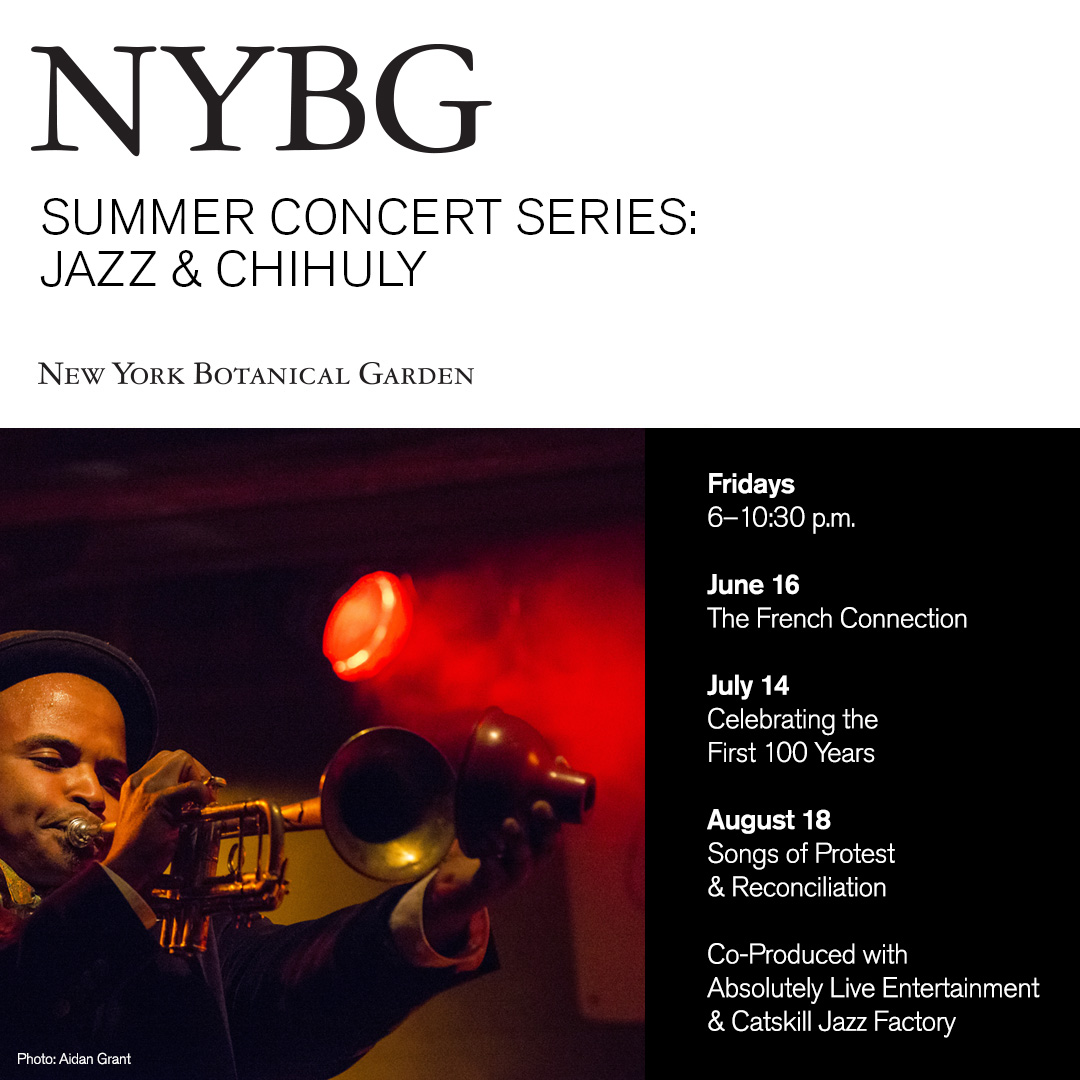 Before and after each concert, stroll among the CHIHULY exhibition artworks, glistening at dusk and mesmerizing when lit after sunset. Doors open at 6 p.m.; the concert runs from 7–8:30 p.m.; and CHIHULY viewing continues from 8:30–10:30 p.m.

Tickets can be purchased at www.nybg.org/visit/admission.

The French Connection is a high-energy and transatlantic world premiere led by American trumpet virtuoso Alphonso Horne and featuring new Parisian vocal sensation Camille Bertault. Following Catskill Jazz Factory’s smashing sold-out The French Connection series, this world premiere takes audiences on a journey that spans the vibrant energy of European swing through the wonders of French mélodie and chanson. This unique concert draws from the works of Debussy, Ellington, and Porter, and the enchanting French Songbook of Edith Piaf, Jacques Brel, Serge Gainsbourg, and others.

Trumpeter Alphonso Horne is a two-time Grammy-nominated trumpeter named by Wynton Marsalis as one of the rising stars of the next generation. Horne has performed with many renowned jazz artists, including Wynton Marsalis, Marcus Roberts, and Michael Feinstein.

Since becoming a social media sensation with more than 800,000 views and 30,000 followers on Facebook—where she sings the solos of the great jazz masters—people have not stopped talking about rising vocalist Camille Bertault. While pursuing her degree in classical piano, Bertault also studied voice and theater. After graduating, she enrolled in the university’s jazz department where she continued her studies in music theory, composition, and improvisation.

Trombonist Chris Washburne is one of those rare musicians whose musical activities cross many styles and cultural borders. From early in his career he refused to be pigeon-holed as just being a jazz or classical player,but instead has continually pursued a diverse path. Chris is currently Associate Professor of Music and Founding Director of the Louis Armstrong Jazz Performance Program at Columbia University in New York. He also tours extensively with various groups and has concertized throughout North America, Europe, Asia, Africa, South America, Central America, and the Caribbean.

Pianist André Mehmari is considered one of the most talented young musicians of his native Brazil. His activities as pianist, composer, arranger, and instrumentalist are highly regarded in both popular and classical music. As his compositions and arrangements have been performed by important Brazilian orchestras (OSESP) and chamber ensembles (São Paulo String Quartet), his career in jazz and Brazilian popular music has attracted wide attention, as has his music in jazz festivals and concerts.

Musicians have a powerful and fearless tradition of speaking to the challenges of their time: Nina Simone’s Civil Rights anthem “I Wish I Knew How It Would Feel to be Free,” Simon and Garfunkel’s “Bridge over Troubled Water,” Stevie Wonder’s “Love’s In Need of Love Today,” are well-known examples. Award-winning pianist Damien Sneed, joined by trumpeter Keyon Harrold and other special guests, leads and stars in this final concert of Summer Concert Series: JAZZ & CHIHULY.

The New York Times’ film and music critic, Stephen Holden, has lauded Sneed’s ability to turn traditional gospel tunes into “concert art songs.” An acclaimed artist with a global reach, Sneed has performed in Europe, Japan, the U.S. Virgin Islands, South America, Africa, and the United States. He has performed at historic national and international events, including the 2012 Olympics in London and activities related to the Inauguration of President Barack Obama. Sneed performed in Washington, D.C. at A Celebration of America at the Kennedy Center for the Performing Arts on the eve of President Obama’s Inauguration and Martin Luther King, Jr. Day in 2013.

Damien Sneed is a multi-genre recording artist and a 2014 recipient of the prestigious Sphinx Medal of Excellence honor, which is presented annually to emerging Black and Latino leaders in classical music. Sneed has also garnered attention in a wide range of other musical genres, including jazz, gospel, pop, R&B, opera, and musical theatre. A pianist, organist, vocalist, conductor, composer, producer, arranger, and arts educator, Sneed has worked with legends such as Aretha Franklin, Wynton Marsalis, Jessye Norman, Stevie Wonder, Diana Ross, and Ashford & Simpson, Wycliffe Gordon, and Eric Reed.

Keyon Harrold was raised in the now infamous Ferguson, Missouri. Harrold has developed a reputation as one of the world’s most sought-after, emotionally electric young trumpeters on the scene. A graduate from the Mannes Jazz Program at the New School University, Harrold is an eclectic trumpeter/music producer/arranger/songwriter that who has been featured on nearly 100 albums ranging from jazz, R&B, pop, gospel, blues, and hip hop. He has toured and recorded with or produced for some of the world’s best artists and ensembles, including Jay-Z, Beyoncé, Common, Erykah Badu, and Lauryn Hill. He is featured as the trumpet sound of Don Cheadle playing Miles Davis in the Miles Davis biopic Miles Ahead.

Named a “regional arts think tank” and “formidable jazz incubator” by Hudson Valley’s Almanac Weekly, and based in the heart of the Catskills, the Catskill Jazz Factory (CJF) is a dynamic jazz program founded in 2012 with an aim to support today’s best young jazz artists. CJF offers year-round school workshops, concerts, mountaintop residencies, lectures, and world-class performances in diverse spaces to a variety of regional audiences across the Hudson Valley by partnering with educational facilities, arts organizations, and a variety of local non-profits and businesses. CJF brings talent to new audiences in non-traditional venues for music, putting jazz where it hasn’t been before. http://www.catskilljazzfactory.org/

Absolutely Live Entertainment (ALE) is a festival, tour, and concert production company led by industry veteran Danny Melnick. In 2017 ALE will produce the 40th annual Freihofer’s Saratoga Jazz Festival, in Saratoga, NY on June 24 & 25 in addition to many other events. ALE also manages acclaimed alto saxophonist Rudresh Mahanthappa. Melnick is the former Artistic Director and Senior Producer at Festival Productions, Inc. where he played a central role in over 90 festivals in Europe, Japan, and the U.S. He was the Artistic Director for the 1999–2007 JVC Jazz Festivals in New York and for the Newport Jazz 50th Anniversary Festival in 2004. He proudly serves as the newly appointed Producer of the Newport Jazz Festival, which celebrates its 63rd anniversary August 4-6 in Newport, RI, and as the Artistic Director of Carnegie Hall’s The Shape of Jazz series, which is in its 14th season at Zankel Hall. www.absolutelylive.net

Artworks by world-renowned artist Dale Chihuly are on view at NYBG in his first major garden exhibition in New York in more than ten years. CHIHULY, presented by Bank of America, features more than 20 installations. Set within NYBG’s landmark landscape and buildings, this sensory-filled exhibition is a must-see throughout the changing seasons from spring through fall.

The Garden’s dramatic vistas become living canvases for work created specifically for NYBG, showcasing Chihuly’s signature organic shapes in brilliant colors. Among the singular sights is a monumental reimagination of his storied 1975 Artpark installation: three new works enliven the water features of the Native Plant Garden and the Enid A. Haupt Conservatory Courtyard’s Tropical Pool, reflecting the interplay and movement of color and light.

The New York Botanical Garden is a museum of plants located at Bronx River Parkway (Exit 7W) and Fordham Road. It is easy to reach by Metro-North Railroad, bus, or subway. The Garden is open year-round, Tuesday through Sunday and Monday federal holidays, from 10 a.m. to 6 p.m. The best way to enjoy the Garden is with the All-Garden Pass, which includes admission to the grounds as well as to seasonal gardens, exhibitions, and attractions such as the Enid A. Haupt Conservatory, Everett Children’s Adventure Garden, and Tram Tour. For more information, please call 718.817.8700 or visit nybg.org

The New York Botanical Garden is located on property owned in full by the City of New York, and its operation is made possible in part by public funds provided through the New York City Department of Cultural Affairs. A portion of the Garden’s general operating funds is provided by The New York City Council and The New York State Office of Parks, Recreation, and Historic Preservation. The Bronx Borough President and Bronx elected representatives in the City Council and State Legislature provide leadership funding.