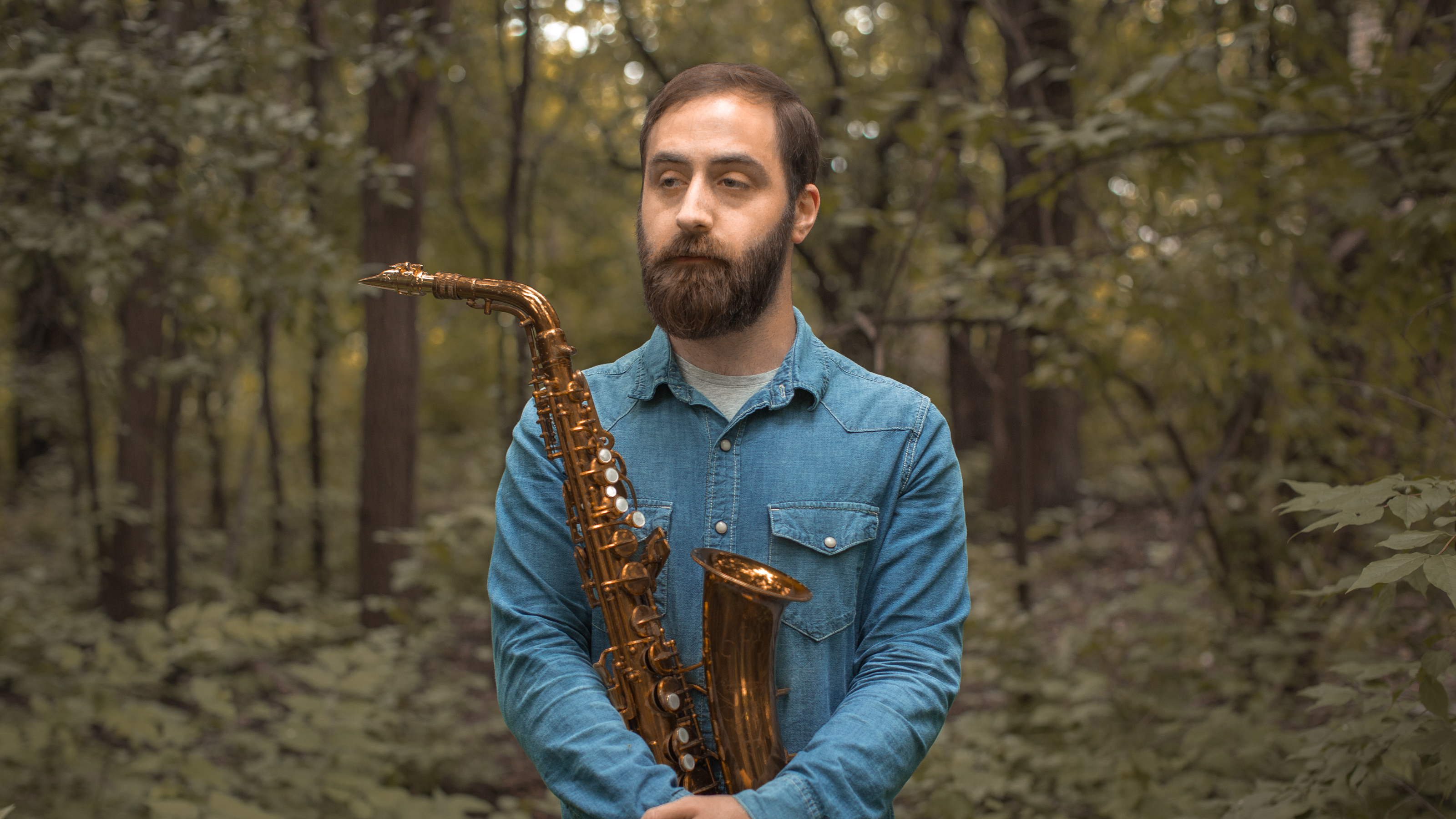 Established alto saxophonist Nick Mazzarella ushers in the spring season with two new recordings: “Signaling”, a duet with esteemed cellist Tomeka Reid, out April 21st on Nessa Records, and “Triangulum”, the debut album from Meridian Trio (featuring contra-bassist Matt Ulery and drummer Jeremy Cunningham), out May 5 on Clean Feed Records. With this double release, Mazzarella presents two of the most fruitful collaborations he’s been involved with since his emergence on the Chicago jazz scene over a decade ago. “These projects reflect my background in both free improvisation and jazz, and my interest in synthesizing these two traditions in my own playing,” said Mazzarella.

On “Signaling”, Mazzarella teams up with the virtuosic cellist Tomeka Reid to follow in the footsteps of saxophonist Julius Hemphill and cellist Abdul Wadud to present a collection of duets inspired by avant-garde music of the 1970’s. The two Chicago-based musicians first discussed the idea of recording as a duo three years ago when their mutual admiration for Wadud and Hemphill was discovered. During a rather “informal pre-production period”, Mazzarella and Reid listened to the recordings of Arthur Blythe and Roscoe Mitchell, along with Hemphill, Wadud, and others, and continuously discussed musical concepts they wished to explore. Finally, in April 2015, the pair recorded an hour and forty-five minutes of improvisation in one session, which was then paired down to a nine track program of about forty minutes.

“On Signaling, cellist Tomeka Reid and alto saxophonist Nick Mazzarella play their own intensely expressionistic music without feeling the need to push towards more, more, more,” says respected writer John Corbett in his liner notes for “Signaling,” adding, “Intimate and dialogical, the studio duets by two of the leading lights of the Chicago creative music scene display an undemonstrative quality, a sense of restraint without the fetishistic kind of holding back that has become fashionable in certain enclaves of improvised music, the so-called lowercase approach. Indeed, by those standards – and even in relation to some of Mazzarella and Reid’s other outings – these compact conversations might be heard as downright voluble.” “Signaling” is a natural fit for Chuck Nessa’s Nessa Records, which is celebrating its semi-centennial this year.

Just as this duo strives to exchange creative energies, ideas and concepts with each other, “Meridian Trio”, as hinted at in their name, holds the same value at the core of their ensemble. “In Eastern medicine, a meridian is a pathway for life-energy, but it’s also a line which divides the eastern and western hemispheres – I see Meridian Trio as a group that explores the ‘inside’ and ‘outside’ hemispheres of creative music. We want our music to be a conduit to exchange creative energies between ourselves and our audience,” says Mazzarella. A “meridian” is also defined as a high point, and one could consider this trio of in-demand musicians a high point of the Chicago music scene.

Mazzarella formed Meridian Trio in 2014 to play a steady monthly gig at Honky Tonk BBQ, a restaurant in Pilsen, Chicago. He chose bassist Matt Ulery and drummer Jeremy Cunningham for the group knowing that their sensitivity, virtuosity, and inventiveness would make them ideal collaborators for exploring the musical concepts he had in mind. These three musicians are equally capable in their abilities to move in many musical directions – from a “traditional” approach of melody and accompaniment, to completely opening up the music into areas unknown. The monthly engagement at Honky Tonk became a workshop for the trio to find focus, experiment, and develop a repertoire of original material that Mazzarella gradually introduced to their performances as the ensemble became more and more cohesive. In January 2016, Meridian was invited to play a one-month weekly residency at The Whistler, a popular Chicago bar and music venue. Building upon their foundational experiences at Honky Tonk, Mazzarella augmented the trio’s book with more new compositions for the Whistler dates, and each of those performances was recorded. The best takes from the month were selected for the trio’s debut album, “Triangulum”. “These live recordings capture the trio at the culmination of two years of growth and development,” says Mazzarella.

Not only is this double release sure to be a significant milestone in Mazzarella’s career, both of these collaborations have undoubtedly developed upon Mazzarella’s already established persona on the Chicago jazz scene as a veteran of both variety and virtuosity.

MORE ABOUT NICK MAZZARELLA
Nick Mazzarella has been a consistent presence in Chicago’s music scene since the early 2000s. His working trio and quintet have served as the primary vehicles for his endeavors as a composer and leader, while as a collaborator or sideman he has performed and recorded with such artists as Tomeka Reid, Makaya McCraven, Avreeayl Ra, Hamid Drake, Joshua Abrams, Ingebrigt Håker Flaten, Rob Mazurek, Dana Hall, Geof Bradfield, and Frank Rosaly. He has released recordings as a leader on Nessa Records, Clean Feed Records, and the International Anthem Recording Company imprint, and has performed throughout the United States and Scandinavia. Mazzarella also curates two concert series: the Anagram Series, presented weekly at Elastic Arts in Chicago, and the Ratchet Series, presented monthly at Cafe Mustache in Chicago.