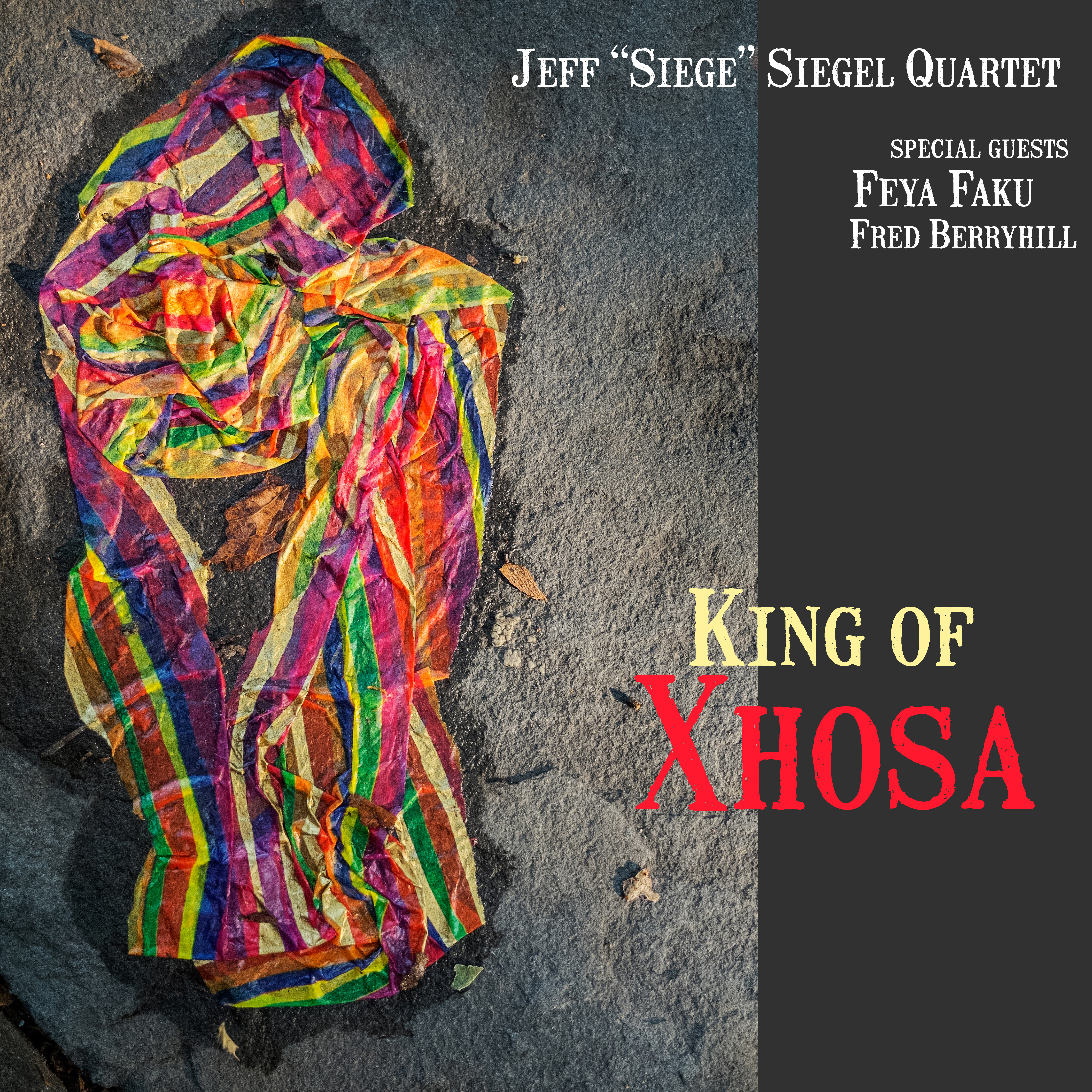 Jeff “Siege” Siegel and the diaspora of the Xhosa people? Absolutely. Siegel is family to the Xhosa; not simply musical family, but in a tradition where every one of 8 million Xhosa raise every one of their kind. And while this may be his first recording connecting Siegel to the Xhosa, it is certainly imbued with the studied grace and nobility of Xhosa tonal language, reflected in the breathtaking use of pitch to inflect every stroke of the stick, brush and mallet on the resonating cymbal and fervent votive tattooed on the taut skin of Siegel’s drums. It’s not hard to be completely seduced by the music of King of Xhosa by Jeff “Siege” Siegel. You don’t have to know that Siegel played with Bheki Mseleku or Abdullah Ibrahim; simply allow Siegel’s stunning percussion colouring to do the needful.

Jeff “Siege” Siegel’s shows a masterful grasp of the many-splendoured tonal language of the Xhosa, a facet of his music that is displayed in the brilliance of the writing and in the performances by the wonderful soloists in this ensemble. Gone are the symphonic flashes found in other big-name recordings of African – even Xhosa – music. Stripping the textural palette right back, Siegel makes musicianship dominate. He also taps into the subtle arts of his fellow performers, especially the flugelhorn player Feya Faku and tenor saxophonist Erica Lindsay, with Fred Berryhill pitching in with a sun splashed palette of his own on “Totem”, “Prayer”, “King of Xhosa” “Call To Spirits” and “Umngqungqo”. Together with those players as well as bassist Rich Syracuse and pianist Francesca Tanksley, Siegel has created a benchmark performance of music in the Xhosa idiom. The fulsome compositions and arrangements are suitably lean. And yet Siegel seeks – and gets – transparency of texture, timbre and colour from all of the instrumentalists.

This transparency allows each composer’s major ideas to crystallise no matter what tempo is set. Sometimes Siegel slows the pulse so that harmonic pillars become massive, as in “Life On The Rock”. Elsewhere he has other members of his Quartet scamper off mischievously after each other in interjections as graceful as they are distinctive. Erica Lindsay is a force of nature throughout. She is always ahead of the curve both in profoundly slow as well as breakneck tempi. Her arabesques on “Gotta Get To It” and “Call To Spirits” drive the solo saxophone parts right up into the stratosphere, sometimes in a slow dance with the other members of the ensemble. She takes the palm with her effortless playing. The true jewel of this recording is Jeff “Siege” Siegel on “King of Xhosa” and “Umngqungqo”. However grand the choruses, however reckless the solos, Siegel draws power from the many levels of tone textures of the Xhosa ;language, here, uniquely restored in all its Jazz glory.

Track List: Totem; Prayer; King Of Xhosa; Life On The Rock; Courage; Unsung; Ballad Of The Innocent; Gotta Get To It; Call To Spirits; Inner Passion; Erica’s Bag; get Real; Umngqungqo (Rhythm).