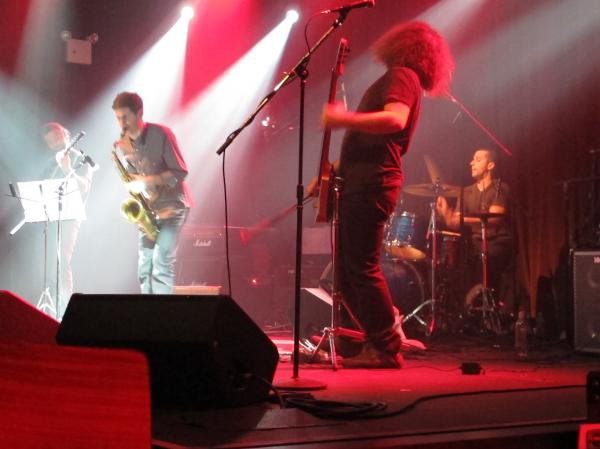 Blues in Space is both everything and nothing one might expect from an electric cello trio in the 21st century… Not quite being able to describe them is perhaps the best part. Their sound reflects their vast musical references ranging from serial composers, to free-jazz improvisers, to rebellious art-rockers. Led by New York City based cellist and composer Rubin Kodheli, Blues in Space is best appreciated live.

The Albanian-born, Julliard-trained Kodheli prides himself on making music that defies classification. He has performed alongside a litany of genre-crossing giants including Pulitzer Prize winner Henry Threadgill, Dave Douglas, Wadada Leo Smith, Laurie Anderson, and Philip Glass, to name a few.

Blues in Space was formed in 2005 by Kodheli and drummer Garrett Brown. Not one to limit himself to any particular genre, Brown always had an appreciation for both hard rock and jazz. He was looking for the perfect opportunity to utilize both, and upon hearing and reacting to Kodheli’s compositions; he knew this was the opportunity he was looking for. The band gathered some buzz in New York and eventually went on to record an EP. However, Kodheli’s solo career as a celebrated sideman, film scorer, and versatile instrumentalist took off simultaneously, thus keeping him away from Blues in Space … until now!

“It’s a musical hang with my favorite people and our appreciation to treat the tunes in the best and most fulfilling way. We bring new vibes as we learn from new realities, politically or personally,” says Kodheli of Blues in Space.

For this special engagement, the cellist comes home reuniting with his former band, this time as a trio with Chris Toridini on electric bass. Tordini has performed with leaders of the improvised music scene for the past decade. Tordini has made a name for himself alongside Tyshawn Sorey, Theo Bleckmann, and Becca Stevens, to name a few. “There isn’t anything he can’t play;” Kodheli says.

Kodheli is thrilled to present the reunion of Blues in Space at Rockwood Music Hall.

More information can be found at rubinkodheli.com.

Composer and cellist Rubin Kodheli is a celebrated, versatile, genre bending creative rebel. He began his musical journey as a cellist in Albania. By age 15, he moved to Belgium to pursue formal studies at l’Académie d’Uccle and later to Germany to attend the Richard Strauss Konservatorium. In the 1990s Kodheli received a scholarship to Juilliard, where he studied as a pupil of cello visionary Fred Sherry.

Creating instrumental alchemy in his compositions and performances, Kodheli deftly molds the cello to emulate the timbre of a guitar, a drum, or a human voice. His compositions teem with nuance, providing the opportunity to listen repeatedly, each time ripe with the possibility of hearing something that previously went unnoticed. Immersing audiences in honest musical explorations, Kodheli pushes listeners to engage, question and contemplate.