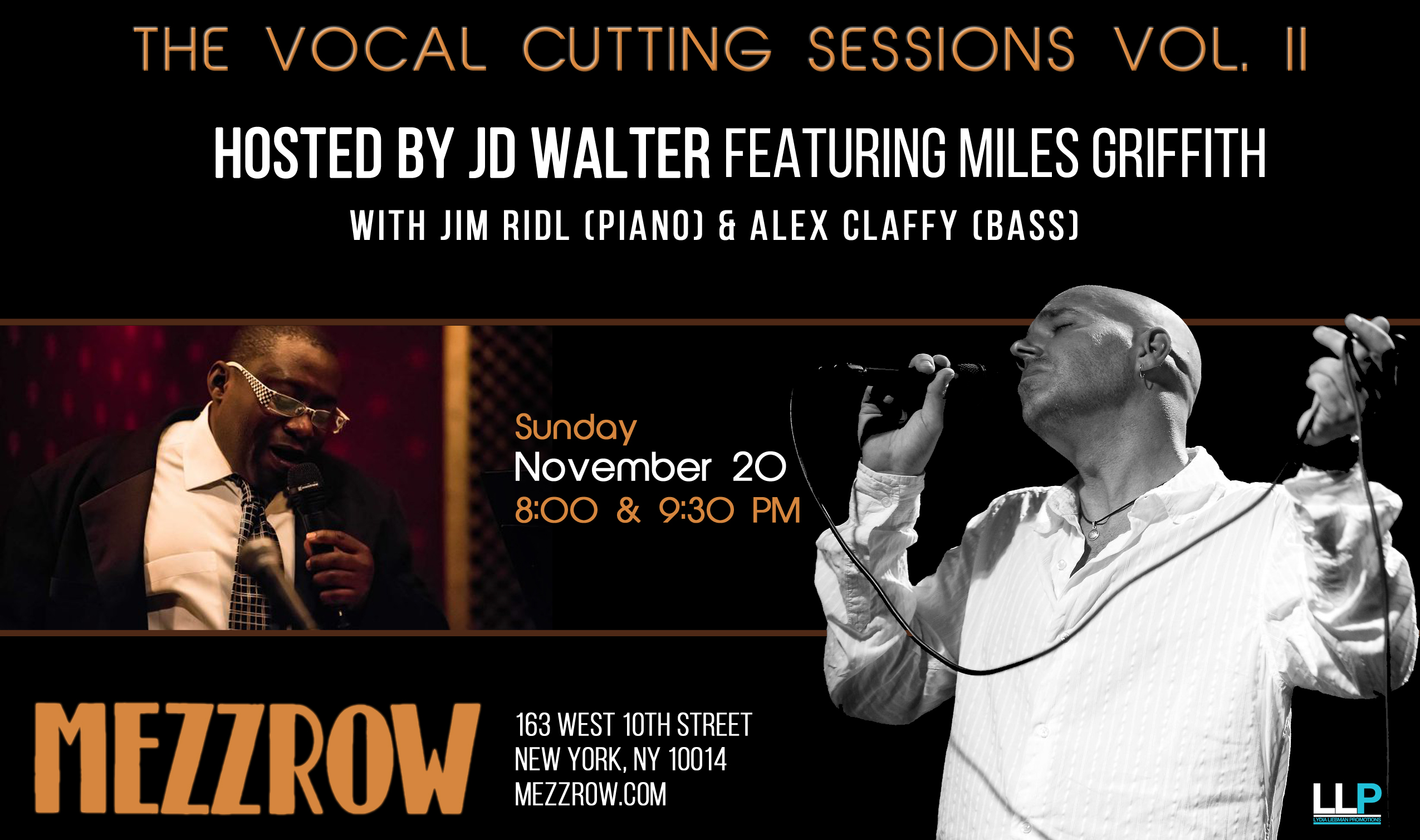 
“He’s the most creative jazz singer, probably, since Betty Carter. It’s no wonder that the great Kurt Elling – with whom he shares some vocal qualities – is, among so many others, an ardent admirer.” – Buffalo News

“Miles Griffith’s Jesse has the power to snarl and growl at the horns, plus a gritty approach to scatting that provides fitting contrast to Jon Hendricks.” – Bob Blumenthal, Boston Globe

Mezzrow, located at 163 West 10th Street in New York, NY, is proud to present the second volume of the Vocal Cutting Sessions featuring vocalists JD Walter and Miles Griffith on Sunday, November 20th at 8:00 and 9:30 PM. The cover is $20. Reservations, which are strongly recommended, can be made by visiting www.mezzrow.com or by calling (646) 476-4346.
Produced by esteemed jazz vocalist JD Walter, the Vocal Cutting Sessions takes its cue from the cutting contests that started with instrumental jazz in the 1920’s as it aims to showcase the very best in cutting edge vocal jazz. JD will host a different guest at each session; the first featured revered vocalist Fay Victor, while this second volume will present stalwart vocalist Miles Griffith.
JD Walter is a jazz singers singer. A purist and an innovator, his style has been compared to many vocal titans, but it is uniquely his own and he has become a singular phenomenon on the music scene. He has released eight recordings, including the recently released “One Step Away”, which garnered great critical acclaim.
Miles Griffith is a world-renowned as a master of the Great American Songbook. Hid non-traditional use of the voice as a percussive instrument, combined with an uncanny harmonic sense has made him a prime choice for many musicians. In 1994, Miles played the lead role of “Jesse” in Wynton Marsalis’ celebrated jazz oratorio, “Blood On The Fields.” It premiered at Lincoln Centers’ Alice Tully Hall, was released on Sony Music in mid-1997 and won Pulitzer and Grammy Awards. Miles Griffith’s impressive resume also includes stints with Max Roach, Reggie Workman, Carl Allen, Bill Lee, T.S. Monk, and others.
More information can be found at www.jdwalter.com and www.milegriffithmusic.com