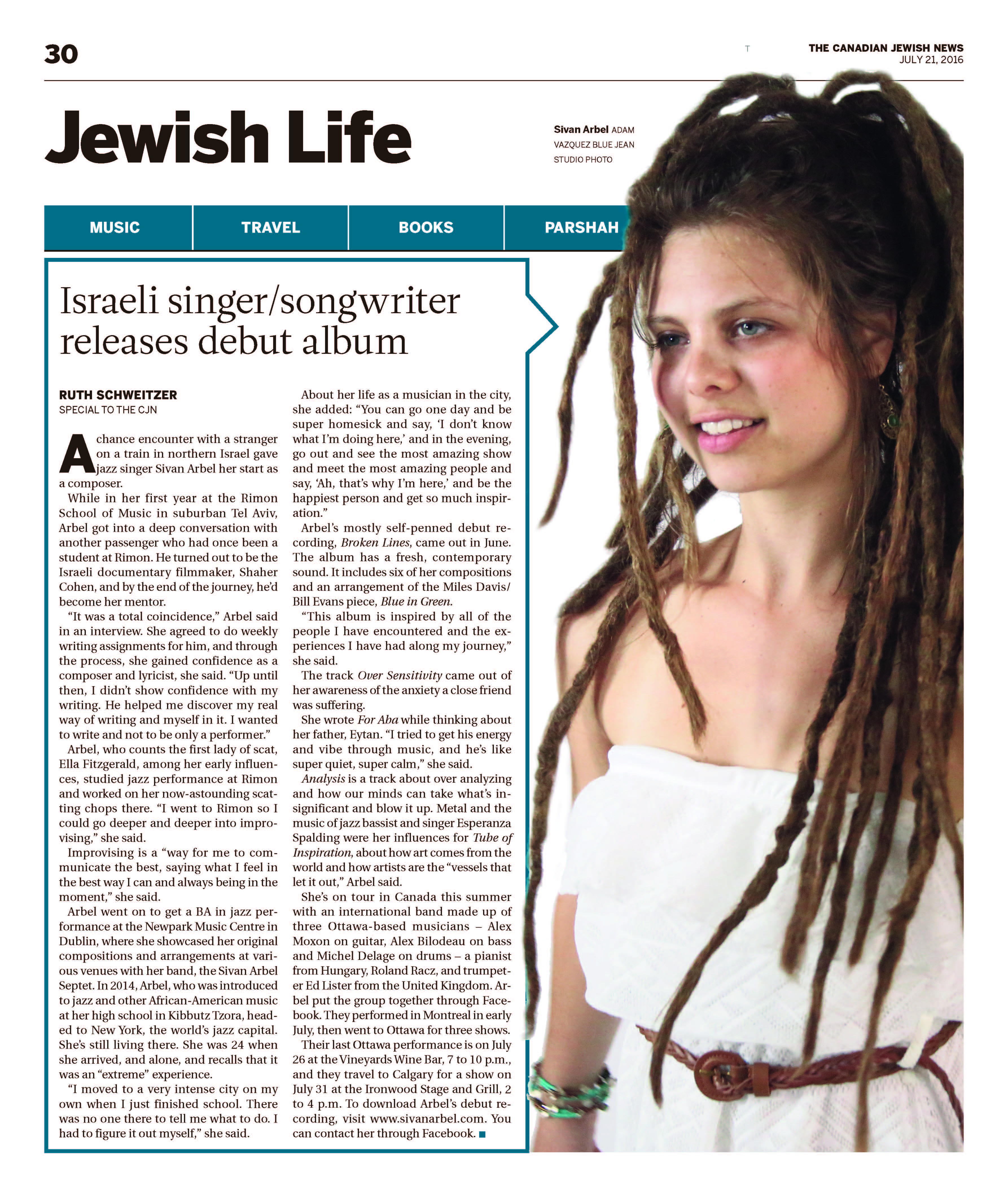 A chance encounter with a stranger on a train in northern Israel gave jazz singer Sivan Arbel her start as a composer.

While in her first year at the Rimon School of Music in suburban Tel Aviv, Arbel got into a deep conversation with another passenger who had once been a student at Rimon. He turned out to be the Israeli documentary filmmaker, Shaher Cohen, and by the end of the journey, he’d become her mentor.

“It was a total coincidence,” Arbel said in an interview. She agreed to do weekly writing assignments for him, and through the process, she gained confidence as a composer and lyricist, she said. “Up until then, I didn’t show confidence with my writing. He helped me discover my real way of writing and myself in it. I wanted to write and not to be only a performer.”

Arbel, who counts the first lady of scat, Ella Fitzgerald, among her early influences, studied jazz performance at Rimon and worked on her now-astounding scatting chops there. “I went to Rimon so I could go deeper and deeper into improvising,” she said.

Improvising is a “way for me to communicate the best, saying what I feel in the best way I can and always being in the moment,” she said.

Arbel went on to get a BA in jazz performance at the Newpark Music Centre in Dublin, where she showcased her original compositions and arrangements at various venues with her band, the Sivan Arbel Septet. In 2014, Arbel, who was introduced to jazz and other African-American music at her high school in Kibbutz Tzora, headed to New York, the world’s jazz capital. She’s still living there. She was 24 when she arrived, and alone, and recalls that it was an “extreme” experience.

“I moved to a very intense city on my own when I just finished school. There was no one there to tell me what to do. I had to figure it out myself,” she said.

About her life as a musician in the city, she added: “You can go one day and be super homesick and say, ‘I don’t know what I’m doing here,’ and in the evening, go out and see the most amazing show and meet the most amazing people and say, ‘Ah, that’s why I’m here,’ and be the happiest person and get so much inspiration.”

Arbel’s mostly self-penned debut recording, Broken Lines, came out in June. The album has a fresh, contemporary sound. It includes six of her compositions and an arrangement of the Miles Davis/Bill Evans piece, Blue in Green.

“This album is inspired by all of the people I have encountered and the experiences I have had along my journey,” she said.

The track Over Sensitivity came out of her awareness of the anxiety a close friend was suffering.

She wrote For Aba while thinking about her father, Eytan. “I tried to get his energy and vibe through music, and he’s like super quiet, super calm,” she said.

Analysis is a track about over analyzing and how our minds can take what’s insignificant and blow it up. Metal and the music of jazz bassist and singer Esperanza Spalding were her influences for Tube of Inspiration, about how art comes from the world and how artists are the “vessels that let it out,” Arbel said.

She’s on tour in Canada this summer with an international band made up of three Ottawa-based musicians – Alex Moxon on guitar, Alex Bilodeau on bass and Michel Delage on drums – a pianist from Hungary, Roland Racz, and trumpeter Ed Lister from the United Kingdom. Arbel put the group together through Facebook. They performed in Montreal in early July, then went to Ottawa for three shows.

Their last Ottawa performance is on July 26 at the Vineyards Wine Bar, 7 to 10 p.m., and they travel to Calgary for a show on July 31 at the Ironwood Stage and Grill, 2 to 4 p.m. To download Arbel’s debut recording, visit www.sivanarbel.com. You can contact her through Facebook.