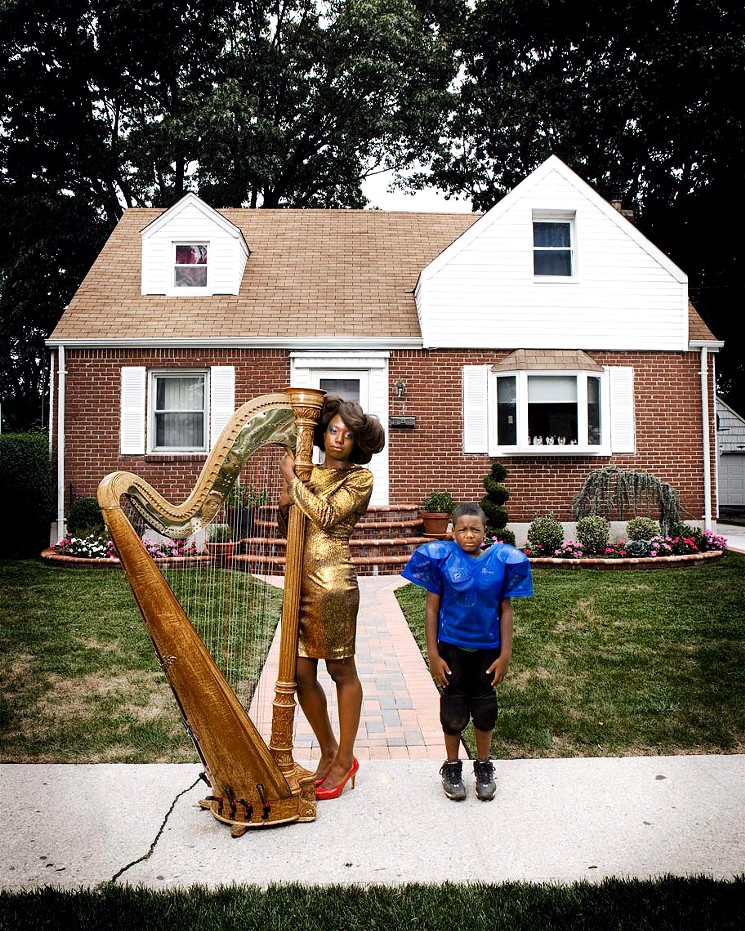 Somewhere beyond the fairy forests and angel wings that harp music traditionally evokes lies Brandee Younger’s rebellion. She’s classically trained, but a typical week for her is more likely to include a jazz jam session one night and a hip-hop studio recording the next afternoon. There’s no room for coyness in her music, although her eyes betray a glimmer of mischief when she plays — which she’s done for everyone from Alice Coltrane’s family to world- famous rappers.

Now it’s her turn to be the tastemaker. Her most recent project is “Harp on Park,” a lunchtime live-music series she curated for Arts Brookfield. To showcase the flexibility of her instrument, she assembled four concerts featuring harpists in performance with other players. “I thought about who is doing something different, challenging the status,” she says. “And while classical harpists are a dime a dozen, the ones [who play other genres] aren’t. It’s a bold thing.” The project culminates on May 12, when Younger plays her own show in the lobby of midtown high-rise 245 Park.

Younger has come a long way for someone who never really meant to be a harpist. Although she grew up around music, she didn’t find her instrument until she was eleven, when she visited a relative and was mesmerized by her harp. Younger’s parents encouraged her to start lessons, visions of scholarships in their minds (she eventually earned several, including to a prestigious graduate program at NYU). But the constraints of how a classical musician should look, behave, and play irked her as her career grew. “It wasn’t just a color thing” — Younger is black — “it was a culture thing,” she says. “My personality was very different than people I played in orchestras with. People meet me and think that I’m a singer.”

That’s because Younger, already a naturally open person, is particularly approachable for a classical musician. Having leaped rather than tiptoed into this uncharted professional territory, she speaks often about her influences and achievements, knows how to laugh at herself, and even lets fans try their hand at her instrument after performances — a cardinal sin for some musicians.

Because the world of alternative harpists is so small, it’s hard not to compare Younger to Joanna Newsom, far and away the most recognizable practitioner of the style. Indeed, both musicians are adept with — though somewhat agnostic on the subject of — genre, wandering in and out of idioms with aplomb. Newsom is inclined toward the baroque, her cascading arpeggios and meditations on life reflecting a folksy bent. Younger, meanwhile, takes notes from black music and Vedantic spirituality; during a recent appearance at Drexel University, her performance of Alice Coltrane’s “Prema” — an ode to everlasting love, filtered through Coltrane’s Hinduism — had a transcendental, trippy vibe.

Younger was raised listening to gospel but eventually became enamored with other types of devotional music. Her discovery in college of Coltrane and Dorothy Ashby, both fellow genre-bending black harpists, shaped her style. She describes her fixation on Coltrane the way saxophonists talk about their love of Coltrane’s husband, John: “I was obsessed with her. There’s something otherworldly about [her music]. Her influence is in my playing. It all just comes out of my fingers, if that makes sense.” In college, Younger reached out to her idol, but by that time, Coltrane had retreated to California, where she had founded an ashram; she never responded. And then one day in 2007, Younger got a phone call. “When she passed away, [her son] Ravi Coltrane asked me to play at her memorial. If that’s not the stars aligning, I don’t know what is.”

Despite holding multiple degrees in harp performance, it was playing at the tribute series alongside jazz luminaries such as Charlie Haden, Geri Allen, and Jeff “Tain” Watts that got her thinking about a career in music, and since then, she’s caught the attention of other influential collaborators, particularly hip-hop artists. She worked with Drake in 2008, well before the rapper’s ascent to superstardom, and later with Common, whom she came to admire for his work ethic. “He was very hands-on with every detail. He wasn’t just sitting there listening. He was giving his musical input.”

Her performance this week will also be a collaboration. Joining her is Rashaan Carter, an upright bassist who likewise comes from a multi-genre background. His appreciation for impressionist classical music powers this duet with Younger, whom he befriended about a decade ago. “We have a nice friendship, which I think helps the music,” Carter says. “In a duo, you’re sort of naked, so you [are] more thoughtful about the things you play, especially in a jazz setting. I get a little more space to explore things.”

Lest anyone think her jump to curation has gone to her head, Younger is quick to laugh off any whiff of pretension. “I’m not a deep person — I’m from Hempstead, Long Island. Nothing exciting, nothing fancy,” she says. “I’ve never had a paved-out path. I just went the direction of the wind.”

Brandee Younger will play at Harp on Park on May 12. For more on the series, go toartsbrookfield.com