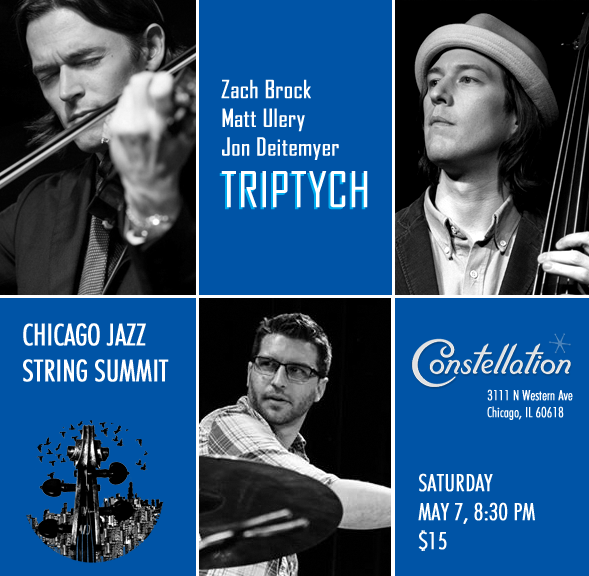 Jazz Violinist Zach Brock is coming to Chicago to perform for the 2016 Chicago Jazz String Summit at Constellation on May 7th. Brock, who lived in Chicago while developing his musical concepts, is known as one of the premiere jazz violinists on the scene today. He will be joined by Matt Ulery on bass, and Jon Deitemyer on drums, longtime collaborators with Brock.  We thought we would catch up with Brock ahead of the show and learn more about his musical concepts, influences and what you can expect to hear at the show.

Performing May 7th at Constellation in Chicago

Chicago Jazz Magazine: You are coming to Chicago to perform at the Chicago Jazz String Summit on May 7th at Constellation. As a musician who has traveled and performed throughout the world with many different artists, how do you think a summit specifically for the jazz string community will help bring awareness to the art form?

Brock: The summit is raising awareness of the art form through musical and cultural cross-pollination. Jazz “string summits” have been around since the 1960s and Tomeka (Reid) has refreshed that tradition. There will be some people that attend because they love anything that involves improvised string music. Others will come because they’re jazz fans and they love the music, regardless of the instruments that are featured. What people are going to hear is a very diverse take on the stringed instrument’s role in jazz.

Chicago Jazz Magazine: What first drew you to the instrument and to jazz music?

Brock: I started playing violin when I was four and my love for the instrument has grown every year since then. I was first drawn to jazz music by hearing classic recordings around the house and listening to my parents extoll the musical virtues of the musicians who played it. I heard Stéphane Grappelli on a record when I was about ten years old and I wanted to be able to play like him. As I followed his music I got deeper into traditional jazz music and never looked back.

Chicago Jazz Magazine: You lived in Chicago for many years, who were some of the musicians that influenced you on the scene? Any stories you could tell about sitting in with someone or hearing perform that made an impact on your playing?

Brock: Von Freeman, Orbert Davis, John McLean, Bobby Broom, Michael Arnopol, Robert Shy, Ron Perillo, Fred Rakestraw, Chris Foreman, Grazyna Auguscik, Sabertooth… the list of influences is really too long to print. Some of the most formative moments in my early musical life happened at The New Apartment Lounge, hearing Vonski and participating in the jam session. Every time Vonski would take the time to talk with me, whether he was complimenting my efforts or gently chastising me to do my musical homework and come back next week, had a major positive impact on my sense of being a real jazz musician.

Chicago Jazz Magazine: Currently you are touring with the Grammy Award winning group Snarky Puppy. How did you end up working with them?

Brock: I was introduced to Mike League, Snarky Puppy’s fearless leader and bass player, by my friend and colleague Jon Deitemyer. They went to North Texas together for a brief time. In fact, I heard that Jon was the original drummer in Snarky Puppy. You’ll have to ask him if that’s true or not. I started playing with Snarky Puppy back in 2008 on a recording called “Bring Us The Bright.”

Chicago Jazz Magazine: On May 7th you will be performing with your group TRIPTYCH, who is in the group and how long have you been performing together?

Brock: Triptych is a compositional collective consisting of myself, Matt Ulery on bass, and Jon Deitemyer on drums. Jon, Matt, and I have been playing together for almost fifteen years in different groups and we started Triptych with a brief Midwest tour last November.

Chicago Jazz Magazine: What can people attending expect to hear?

Brock: We’re high-brow but we get down and dirty. It will be like going to the Art Institute with some good Bourbon and an iPod and throwing an illicit dance party with your best friends.

Chicago Jazz Magazine: Where can people get more information on your recordings and tour dates?

Brock: My website is the most up-to-date source for all of my tour dates and recording info:www.zachbrock.com