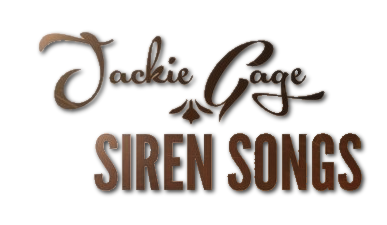 It can’t be said often enough. A jazz vocalist who thinks outside the proverbial box stands apart from those who simply cover the standards. Jackie Gage uses a mix of styles as well as fresh arrangements, a few lesser-known songs and new compositions to establish herself as one who stands apart with, Siren Songs (First Orbit Sounds, 2016).

Gage enjoys an a cappella scat to introduce the classic, “That Old Black Magic.” When the instruments join in, the song takes on a soulful groove. Gage’s vocal straddles the line between Ella Fitzgerald and Natalie Cole. She sings with joy and verve. The string quartet, The Juxtapositions Chamber Ensemble, assist on selected tracks. They are Ilana Thomas and Kristina Dutton, violins; Su Buchignani, viola; and Freya Seeburger, cello.

Vado brings us into the first of three original songs in the set, “It’s Your Love.” It’s a mellow, downshifted ballad. The overlapping echoes of the chorus add a haunting element. “Never have I come so far / to make someone else my star / ’til I met you,” she sings. The band plays elegantly behind her through verse and chorus. But during the middle break, when Gage’s tone changes, each player injects some exclamation points to augment the lyrics.

Gage co-wrote three songs with William Bohrer. Wat contributed to one of those.

With two brief interludes, the nine tracks of Siren Songs are Gage’s presentations of love and loss. She arranged the two standards, “That Old Black Magic” and “Afro Blue.”

Gage is a native of San Jose, California. The 25-year-old recently moved to New York, but returns to her home state annually with tours from Sacramento to San Diego. As a 2014 Jazz Search West finalist, she was awarded performances at nationally recognized venues, Yoshi’s in Oakland, the Freight and Salvage in Berkeley and the Sound Room in Oakland. She has performed at the Fillmore Jazz Festival, San Jose Summer Fest and Berkeley Juneteenth, among others.