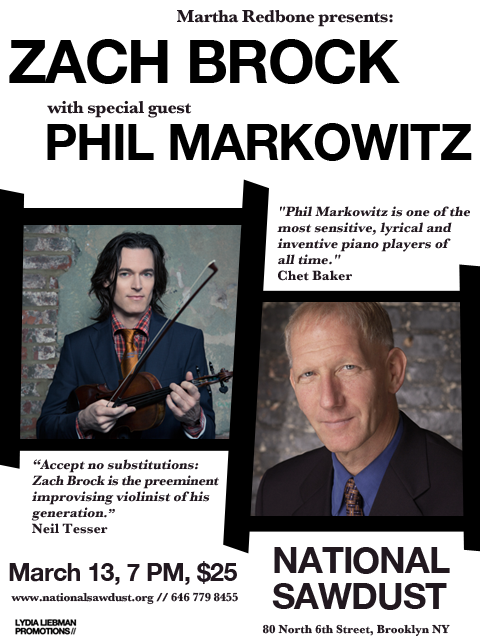 Marth Redbone presents Zach Brock with special guest Phil Markowitz on Sunday, March 13 at 7:00 PM at National Sawdust, located at 80 N 6th Street, in Brooklyn, NY 11211. Tickets are $25.00 and can be purchased online by visiting www.nationalsawdust.com or by calling 646.779.8455.

Zach Brock and Phil Markowitz have created new repertoire for violin and piano that draws on the traditions of jazz, contemporary classical, and the “roots” music of their respective backgrounds. The first iteration of this new direction appeared on the 2014 release “Perpetuity” and they have been expanding their duo repertoire ever since. While an affinity for American jazz is front­and­center, Brock’s Appalachian roots and Markowitz’s Eastern European ancestry have sown deep threads that run through the new compositions. The audience will hear an unorthodox combination of post­Romantic, serialist, and jazz dialects fused with rhythms from West Africa, South America, and the Balkans.

Heralded as “the pre­eminent improvising violinist of his generation,” Zach Brock is an award-winning jazz violinist and composer whose music draws on the traditions of jazz, classical, world, and popular music. Downbeat Magazine named Zach it’s “Rising Star” Violinist of 2013 and awarded his 2015 release “Serendipity” with four­and­a­half stars. The Chicago Tribune recognized Zach’s recording ”Perpetuity” as one of it’s “top ten jazz recordings of 2014.”

Phil Markowitz, a celebrated veteran of the international jazz scene for more than thirty years, creates music ranging from hard­cutting chromaticism to the most lyrical post­romantic ballads. His credentials span the traditional to the avant­garde; from early associations with Chet Baker and Toots Thielemans through his respective twenty and fifteen­year affiliations with Bob Mintzer and David Liebman. He is currently a professor in the graduate and doctoral divisions at the Manhattan School of Music.

This performance is part of The Descendants; A Concert Series curated by Martha Redbone & Aaron Whitby. The first weekend of the series, the Descendants will present music by musicians with deeply anchored roots, visceral connections to the past in their music and a forward thinking approach to creating art.

National Sawdust (NS), an unparalleled, artist-led, non-profit venue, is a place for exploration and discovery. A place where emerging and established artists can share their music with serious music fans and casual listeners alike.