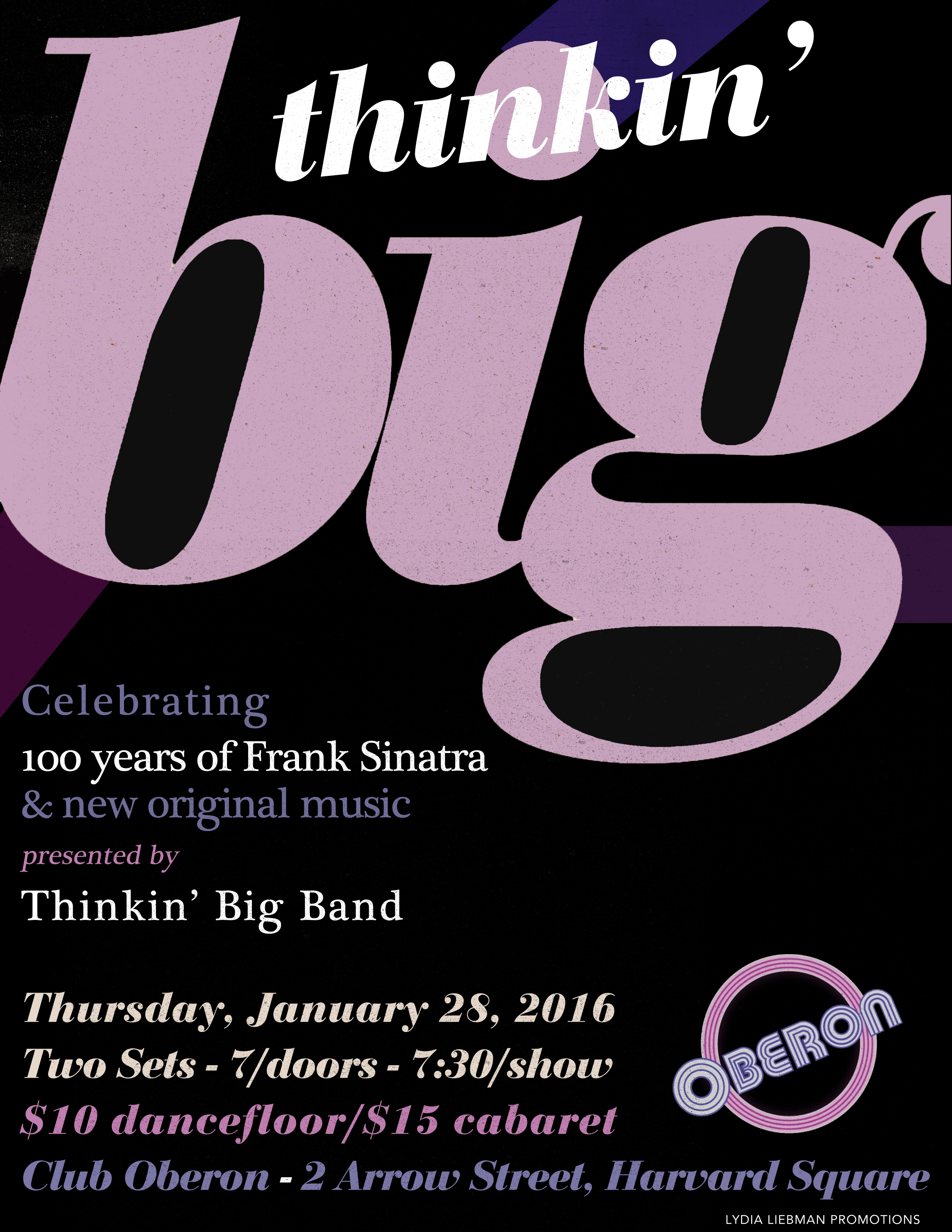 Oberon, located at 2 Arrow Street, Harvard Square in Cambridge, MA is proud to present the Thinkin’ Big Band: Frank Sinatra’s 100th Birthday on Thursday, January 28 at 7:30 PM. Tickets are $10 for the dance floor and cabaret seating is $15. Tickets can be reserved by visiting this link: http://tinyurl.com/z2t39bt

Thinkin’ Big will make their debut at Harvard Square’s legendary Oberon Theater to present ‘Frank Sinatra’s 100th Birthday’; their thrilling tribute to Old Blue Eyes’ widely celebrated centennial. With their unique renditions of Sinatra classics such as “Fly Me To The Moon” and “The Way You Look Tonight” and their complimentary original music, Thinkin’ Big harkens back to the Golden age of Big Band swing with a modern twist.

Formed in October 2010 in Boston, Thinkin’ Big is an 18-piece big band that pushes the limit on traditional expectations of a big band to create a modern-day large ensemble that melds together 18 individual voices to form one united harmony. The ensemble originally began as an outlet for student composers and musicians but has since grown to become an international phenomenon with two international tours and two albums under its belt including the recently released Kaleidoscope.

Thinkin Big’ has stayed true to its roots, and now showcases the vast compositional talents of band-leader and trumpeter, Jonah Francese. According to Francese, the ensemble is truly a “a tight-knit musical family” comprised of some of Berklee College of Music and New England Conservatory’s stand out students and graduates, representing some of the finest young musicians from all around the world.

ABOUT OBERON:
OBERON is the American Repertory Theater’s second stage, a destination for theater and nightlife on the fringe of Harvard Square. In addition to offering work from the A.R.T’s main season, OBERON is also a thriving incubator for emerging artists to imagine new projects that could only exist in this exciting club theater environment. Hundreds of artists and performance groups brought work to the space each year. OBERON regularly features local performers including aerialists, beat poets, food artists, tap dancers, gender-bending sketch troupes, comedians, hula-hooping burlesquers, and pop-and-lock human statues to name but a few.