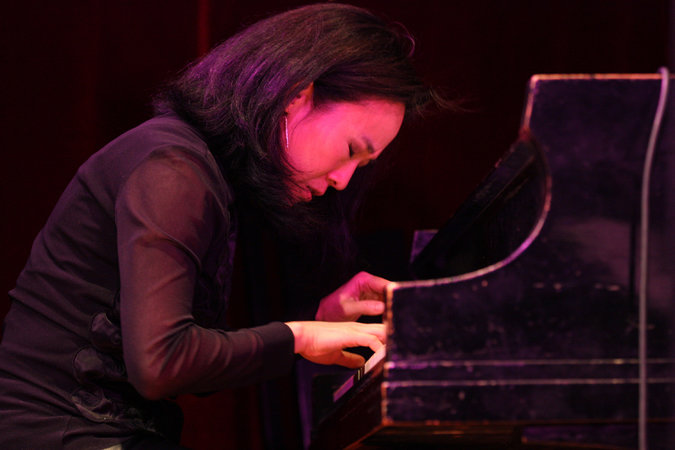 Review: ‘Sung With Words,’ a Collaboration by a Pianist and a Poet
By Nate Chinen

“Sung With Words,” a song cycle by the pianist Helen Sung and the poet Dana Gioia, starts from the premise that jazz and poetry are natural allies. This isn’t a new or provocative idea, but it can still present a high degree of difficulty in performance. And in its premiere on Thursday night at the Jazz Gallery in Manhattan, “Sung With Words” didn’t quite clear the bar, despite being well played and well intentioned, with an impressive concentration of musical talent.

Ms. Sung has an aesthetic of orderly insight, and she favors an articulate brand of post-bop. She first met Mr. Gioia, the new poet laureate of California and a former chairman of the National Endowment for the Arts, eight years ago at a White House state dinner. They had kept up a friendly correspondence before Ms. Sung approached Mr. Gioia with the idea for a collaboration.

She did so with trepidation, she explained onstage, “as someone who considered herself allergic to poetry for most of my life.” For the piece, supported by a grant from Chamber Music America and the Doris Duke Foundation, she drew inspiration first from some of Mr. Gioia’s published poems, like “Pity the Beautiful,” which he read aloud on Thursday.

The trumpeter Ingrid Jensen in “Sung With Words.” Credit Hiroyuki Ito for The New York Times
Ms. Sung’s ensemble then translated that poem into a minor-key sashay, with the singer Carolyn Leonhart gamely negotiating some gawky intervals in its vocal melody.

Mr. Gioia, a lifelong jazz fan, is a lucid, accessible poet, who, for the purposes of this project, used rhyming couplets. Besides “Pity the Beautiful,” he wrote some poems expressly for Ms. Sung’s use. One, “Hot Summer Night,” — “Let’s go downtown. It’s a hot summer night./Let’s not stay home and get in a fight” — featured Carmen Lundy on vocals. She gave it a live spark, starting out with just Samuel Torres on bongos and taking brash liberties with the form.

Ms. Sung’s ensemble, which also had Ingrid Jensen on trumpet, John Ellis on reeds and flute, Reuben Rogers on bass and Donald Edwards on drums, worked smartly but tentatively. (An exception: “The Stars on Second Avenue,” in a bossa nova drift, with a more relaxed turn by Ms. Lundy.) More rehearsals might have helped, but the deeper problem was in the design.

Given that the poetry in “Sung With Words” finds expression in song, it would have made sense to pay more heed to song craft; an occasional bridge or chorus could have helped with the monotonous rollout of verses. Beyond that, there were no stakes in these poems. If Ms. Sung seemed at a loss for how to work with them, it might have been for a lack of narrative tension.

She closed the set, intriguingly, with an instrumental titled “Lament for K. B.” She said it had been inspired by the story of Kalief Browder, a young man who spent three years imprisoned on Rikers Island without being convicted of a crime, and later killed himself. Mr. Ellis, playing bass clarinet, blended with Ms. Jensen in a stealthy crawl; the song felt unsettled, but purposely so.