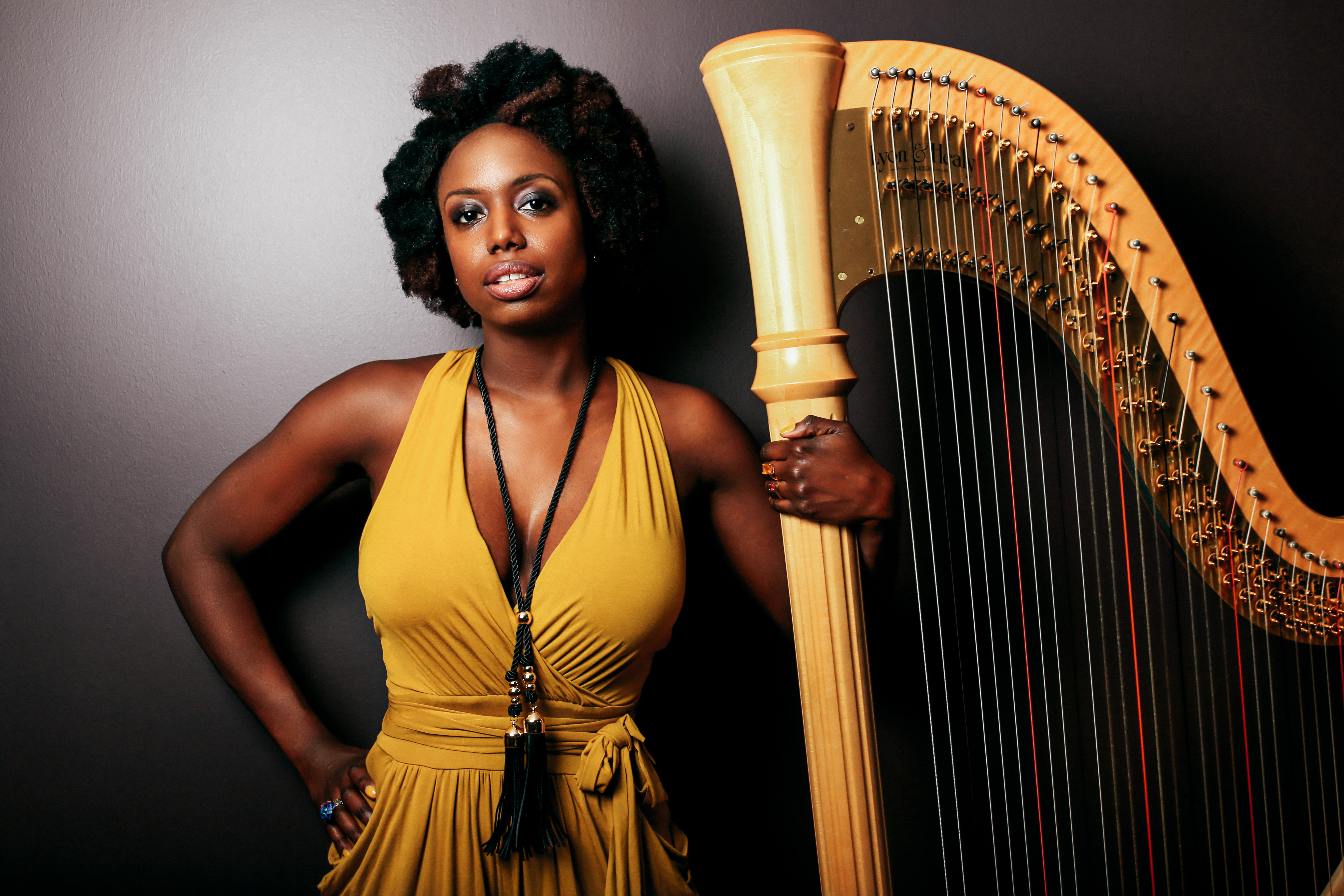 “Younger taps into the spiritual well that fueled the art of both Dorothy Ashby and Alice Coltrane, yet she remains ever-cognizant of the time in which she lives and plays.” Dan Bilawsky, All About Jazz

REVIVE Music proudly announces the February 19 release of “Wax & Wane”, the sophomore album from harpist Brandee Younger. Evoking the musical equivalent of rare gems, Younger emerges from the legacies of Dorothy Ashby and Alice Coltrane as she ushers in a new era that celebrates the unsung titan of string instruments. The first promotional video can be viewed at Revive-Music.com. Promotional copies will be available January 2016.

Born during the REVIVE Music and Blue Note Records sessions for “Supreme Sonacy Vol. 1,” Younger’s latest album is a testament to her musical forebears that fuses classical technique with the persistent groove at the core of the Black music canon. Produced by Casey Benjamin, “Wax & Wane” features flutist Anne Drummond and long-time members of Younger’s quartet, tenor saxophonist Chelsea Baratz and bassist Dezron Douglas, who trades in his upright bass for electric. Joining them are drummer Dana Hawkins and esteemed guitarist Mark Whitfield. Celebrated string duo Chargaux joins Younger for the project’s interludes.

“‘Wax & Wane’ represents constant change — back and forth,” says Younger. “We chose it as the title of the project because it is truly representative of the human experience, as an artist and individual. The high points and low points coloring the continuous struggle for balance at every phase of the journey exist – as they do in daily life – at the core of all of my work. ‘Wax and Wane’ is also the name of one of Dorothy Ashby’s compositions from her album ‘The Rubaiyat of Dorothy Ashby’.”

“Wax & Wane” builds on the jazz/hip-hop/funk foundation laid down by Younger’s “Dorothy Jean”, Supreme Sonacy Vol. 1’s lead single that premiered on “Wax Poetics” in July of this year. “Exploring the depths of Ms. Ashby’s music was certainly a treat,” says Benjamin. “I can’t think of a better person than Brandee to channel the true essence and continue the lineage of Ms. Ashby’s work through her own voice, spirit and experience. I’m happy to ride along on the journey.”

The age-old combination of flute and harp is turned on its head in the hands of Drummond and Younger who bring together their lilting sounds to produce beautiful melodies underscored by unrelenting funk. “The timbres of the flute and harp are very compatible as both instruments lend themselves to tender expression that composers like Debussy took full advantage of,” explains Drummond, adding: “But they can be bold as well. With this project, I loved putting the blend of flute and harp within the groove-driven arrangements that Casey conceived for us all.”

With “Wax & Wane,” Brandee Younger is poised to take her place as a sonic tour de force and the latest innovator in a lineage of groundbreaking musical agitators leading to the rise of the harp. Spiritually transcendent and perennially fresh, “Wax & Wane” strikes a delicate balance between pushing the envelope and flat out breaking the mold. “I wanted to place the harp in a totally different context than what listeners are generally accustomed to and continue to position the harp in way that’s relevant today,” says Younger. With this seven track collection, Younger presents an altered universe where the fluttering polyphonic exchange of the harp and flute expand and contract against a dense rhythmic display.

“The combination of Dezron, Dana and Casey was the key to creating the underlying sound and feel of the album,” says Younger, “Mark was the icing on the cake while Anne and Chelsea took the initiative to harmonize melodies and elevate the tunes beyond what was written on paper.”
The official release of “Wax & Wane” will follow an album release concert on February 17 at Dizzy’s Club Coca-Cola in New York City.

MORE ABOUT BRANDEE YOUNGER:
A classically train­ed harpist, New York native Brandee Younger is a graduate of the prestigious Hartt School of Music as well as New York University’s Steinhardt School. Over the past decade, Younger has shared the stage with a host of jazz luminaries including Jack DeJohnette, Charlie Haden, Pharoah Sanders and particularly Ravi Coltrane, whom she began working with in 2007 to honor his late mother Alice Coltrane. Her debut EP “Prelude” was released in June 2011 to critical acclaim. As a classical musician, Younger has been featured as a soloist with The Harlem Chamber Players and has performed with the Eastern Connecticut Symphony, Waterbury Symphony, Soulful Symphony, Ensemble Du Monde, Camerata New York and the Red Bull Artsehcro, a “non-conformist” orchestra. In hop hop and r&b, Younger has worked with Common, Drake, John Legend and most recently, Lauryn Hill, to name a few.